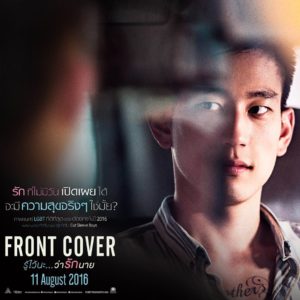 “If you’re looking for a fun and sexy summer movie, I’ve got the perfect thing for you. Front Cover has it all: two fine-ass main characters, steamy will-they-or-won’t-they chemistry, and some poignant commentary about what happens when Chinese and American culture gets wrapped up in the gay Asian experience.”

“What happens when an ace stylist (gay, of course:”All the good ones are,” he explains early on) for a major fashion magazine in New York City gets the job of styling a shoot involving a red-hot and very popular Chinese actor who’s just a little bit uncomfortable around homosexuals? Given that the movie under consideration is a gay film, you can probably choose among several typical scenarios and come pretty close to correct.”

“Culture can be a blessing and a millstone. Not all of us want to be defined by our ethnicity. That also goes for our sexuality, although that is becoming less of a stigma these days. The LGBTQ community has made some big strides in this country over the past few years but sometimes we forget that it isn’t the same situation everywhere.”
Click here for article

“A skillfully written and acted gay love story about two young men of Chinese ancestry, Ray Yeung’s “Front Cover” has a title that evokes the differences in its main characters. Ryan (Jake Choi), a New York fashion stylist, aims his energies toward the front covers of magazines. Ning (James Chen), a movie star from China, also projects himself into the public eye, but uses his image as something else—a cover for his real self.”
Click here for article