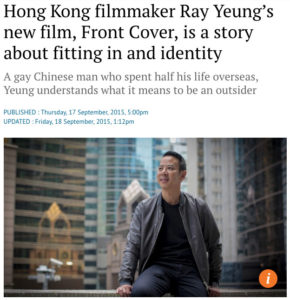 Stranger Tickets article
Seattle has invited Front Cover back to be screened at the Seattle Lesbian & Gay Film Festival If you missed the movie at the Seatte International Film Festival last May, this is your opportunity to see it at SLGFF on October 10, 2015.

CHICAGO INTERNATIONAL FILM FESTIVAL
Front Cover has been invited to take part in the World Cinema/Out-Look Competition at the 51st Annual Chicago International Film Festival in October. The Chicago International Film Fest is the longest running international competitive film festival in North America showcasing more than 150 narrative features, documentaries and short films from over 50 countries. Front Cover is proud to be part of this prestigious event.

We are extremely thrilled to announce that FRONT COVER will have its International Premiere as the Opening Film at the 26th Hong Kong Lesbian and Gay Film Festival (HKLGFF) on September 19, 2015 HKLGFF is the longest running LGBTQ film festival in Asia. To celebrate Asian filmmakers and their outstanding LGBTQ films, the festival theme is “Viva Asia” and will run from September 19th – October 10th. This year, HKLGFF has the biggest Asian film selection in the 26 year history of the festival. There will be an Opening Gala party after the movie at Zafran, located in Central.

Strand Releasing has picked up the distribution rights to the film
Which Fortissimo is selling at Toronto. Strand is planning a North American festival run and a theatrical release starting in New York from spring 2016.

“Very developed characters make this film feel fresh, and the discussion of feeling out-of-place in one’s own culture is very well-balanced with the imagery and interactions.”